One of the best-known Summer flowering bulbs is the Dahlia. The Dahlia is a truly rewarding plant in the garden. The better you care for them, the more you will enjoy abundant flowering. Dahlias are originally from Mexico. This explains why the Dahlia tubers are not hardy. In addition to the application in the garden, various Dahlia varieties are ideally suited for use as a pot plant on the terrace or balcony. Did you know that Dahlias are also very suitable as cut flowers? This means you can also enjoy these colorful summer bulbs at home. The Dahlia is one of the most colorful Summer flowering bulbs and can also be combined very well with Perennials. Its versatility makes the Dahlia a very popular and important summer bloomer. There are many different colors and flower types. Below we highlight a selection of our Dahlia range.

The Anemone flowers are also considered to be half-filled Dahlias. The petals are slightly bulged, so that it has an effect like a cushion. The color of the Dahlia's heart often contrasts with the petals. Well-known types of this Dahlia variety are Dahlia Freya’s Paso Doble or Dahlia Polka.

The largest of the Dahlia family is the Cactus Dahlia. It consists of large double flowers, sometimes as big as a child's head. The flowers look a bit like a star because they have pointed petals. This species can grow up to 39 inches high. Examples of the Cactus Dahlia are the Dahlia Gelber Vulcan and Dahlia Okapi’s Sunset.

The Decorative Dahlias can easily reach 39 inches in height, but there are also shorter varieties. Just like the Cactus species, they have large, double flowers, but with this species the petals are broader and have a wolf-like shape. Examples of this species are the Dahlia G.H. Lammerse, Dahlia Arbatax or Dahlia Arabian Night. 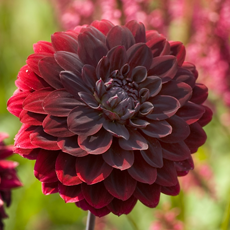 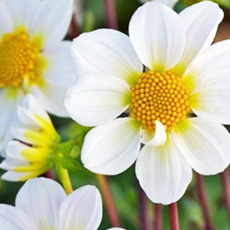 If you are looking for low-growing Dahlias, it is best to choose the Gallery variety. These flowers have a height of 10 to 17 inches, making them very suitable for planting in beds, borders or in pots. A well-known dahlia tuber from this variety is the Dahlia Gallery Bellini. 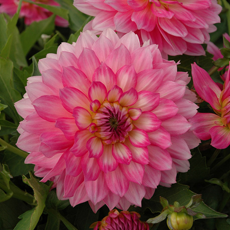 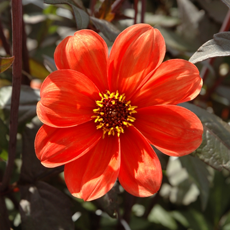 The pompon dahlia grows to about 39 inches high. The advantage of this variety is that it can withstand rain, as this can sometimes cause problems for the large-flowered Dahlias. The Pompondahlia has small, bulbous flowers in the shape of a pompom. A well-known Dahlia from this variety is the Dahlia Stolze von Berlin.

Of course, these are not all types of Dahlias that we have in our Dahlia range. For a complete overview you can go to our Dahlia page. Do you already know exactly what kind of Dahlias you want? Then you can easily search with our filter. For example, you can create a search function for a specific bulb type, flower color or flowering height.

You can choose to force the Dahlias, we also call this pulling. This is possible by planting the tubers in a pot in March and putting it in a warm place. You can simply plant the tubers in potting soil. Due to the warmer temperature, the tubers are already sprouting. It is important to keep the Dahlias indoors until the last frost, because Dahlias can absolutely not withstand the frost! Usually the last frost is around mid-May. When the last frost has passed, you can put the Dahlias outside. Make sure you give the Dahlia in a pot enough water.

From mid-May, when the last frost has passed, you can plant the forced Dahlias in the open ground. Do this in nutritious soil in a sunny spot. If they get too much shade, they are likely to produce less flowers. The low Dahlia varieties can also easily be planted in a pot. Make sure that the pots are large enough so that the chance of drying out is minimal. You can plant the Dahlia tubers that have not yet been forced after the last frost. These will start to bloom at the end of the summer. The forced Dahlias will show their first flowers in July.

Dahlias as a cut flower

Dahlias are not only beautiful in the garden, but they also complete your interior at home. Do you want to cut the Dahlias from your garden? Then we have a few more tips for you. It is best to cut the Dahlias early in the morning or late at night, because then they are in the best condition. Use a sharp knife for this. Pay attention! Do not cut Dahlias until they are opened, they probably won't come out in the vase. Make sure the vase is well filled with lukewarm water, as Dahlias are very thirsty. Remove the leaves from the stem before placing the Dahlias in the vase. To let the Dahlias stand as long as possible, we recommend adding a few drops of chlorine to the water and changing the water every other day. Make sure that you do not put the Dahlias indoors in full sun!

You can order Dahlia tubers from us from March to May. Which Dahlia is your favourite? View them all in our Dahlia range!